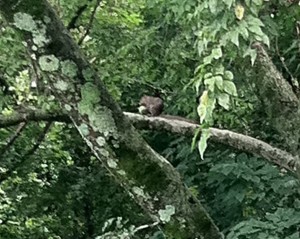 This is that cheeky squirrel that lives in the tree in our back yard. I know the picture’s not that clear, but you can see he’s holding a ball. Actually that’s a tomato…. from MY VINE! Can you believe that squirrel had the NERVE to steal that tomato while I was standing on the deck? oh DOG!!!!

We live in Murfreesboro, TN, in almost the middle of town, and yet we have our fair share of wildlife visitors. For instance, there’s a couple of bunnies that also live nearby. Last winter they nested under our storage shed INSIDE our fence! Jen says those rabbits are some daring little guys to be doing that!

Here is the evidence that they were inside the fence!

And if that don’t beat all, there is a deer, yes, a DEER! that hangs out around here. We first saw her one morning while on an early walk. Jen was convinced she was seeing things, because what would a DEER be doing in the middle of town? But a week or so later she showed up in our backyard! She was about to go visit the neighbor’s garden. Lucky for us Jen had her phone on her and snapped a pic.

There are also some cats that hang around. Some have homes; some don’t. One is a cute little tortie girl that came around a couple months ago. We found why soon enough- babies! She moved them just outside our fence for awhile, but then moved them again and we didn’t know where. We don’t know if they’ve made it in this heat, but hope for the best and are looking for spay options for mama.

The amazing thing is that these creatures come so close to an area where dogs stay. I mean, I know we’re inside dogs and all, but we do leave our mark on our territory. It’s never a dull moment around here, as we never know who will visit next!

Check me out! This is my first YouTube video! Jen is no expert, but she’s learning. I like it when old humans are willing to learn new tricks. woo woo woo!!