First of all we send prayers, comforting thoughts, and all the energy we can muster to the people of Moore, Oklahoma.

Next, Hissy Fit Jones throws down some hisses: 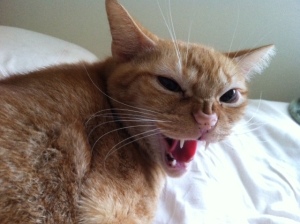 Hisses for Taco Fusion in Tampa, Florida, for having the nerve to put lion meat tacos on the menu. After the news hit the internet, the threats starting pouring in. So did the business, and the lion meat tacos have already sold out.

Hisses for the Coca-Cola Company, which fought against a recycling program in Australia because the company said it was bad for business. Plastic is killing sea birds, who mistake it for food, eat it, then starve to death when they can’t digest the plastic.

And here’s June Buggie with some amazing purrs:

Purrs for rocker Slash, for calling for an end to bear bile farms. Slash recorded a short video message for Animals Asia.

Purrs for the French oil and gas company Total for deciding to not search for oil in the Virunga National Park of the Congo. Virunga is the home to mountain gorillas.

Purrs for Jasmine Dustin and Cause 4 Paws, who helped Charles Gilliam get veterinary care for his service dog, Big. Gilliam is homeless and was on the streets passing out his vet’s card and trying to get help for his dog. Dustin saw Gilliam and helped him get the money and help Big needed.

What hisses or purrs do you have to add this week?

Hello and welcome to my journey of living after existing for years in depression. I write about companion animals, love, and creativity.
View all posts by Jen and the Furries »
« Poo on Monday!
Words on Wednesday- How to Help Oklahoma »

33 thoughts on “Hisses and Purrs!”