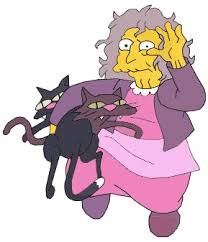 And retailers have taken notice, for now they, too, are calling us Crazy Cat Ladies.

For instance, World’s Best Cat Litter has an ongoing contest for you to show the world you’re a crazy cat lady by taking a photo of yourself and posting it on social media.

That’s right, denigrate yourself and all of your gender on social media in hopes of winning a few bags of cat litter.

But wait, am I being overly sensitive? After all, the photo announcing the contest looks like this:

Wikipedia identifies the term “cat lady” as pejorative- that means abusive. So no, I think I’m being quite sensible in saying there is no way I will EVER buy a product from a company that shows so little regard for me as a customer and as a human being.

I’m tired of women being expected to be forever young, impossibly thin, irresistible to men, married well, ambitious- but not overly so, and the producer of perfect children. Yes, in 2014 we still have those expectations for women.

No matter her abilities, a woman who isn’t beautiful is to be pitied.

A woman who is ambitious is a bitch.

A woman who enjoys her body is a slut.

A woman who wants something out of life besides marriage and children is selfish.

And a woman who loves animals is crazy. Francis loved animals, and he was named a saint. Something ain’t right about that.

By allowing retailers to call us crazy, you are saying that it’s OK to discount us, especially when it comes to our standing up for the welfare of animals. So you’re not only disrespecting me, you’re disrespecting what I stand for.

If you want to label yourself, how about choosing a label that shows women in a positive light? Me? I’m an animal welfare advocate, and I’m mighty damn proud of that fact.

And for the gods’ sake, don’t buy products from companies that call you crazy.