The Man Who Started the Animal Welfare Movement in America

Recently I was given the opportunity to read and review Monsters and Miracles: Henry Bergh’s America, by Gary Kaskel.

Monsters and Miracles is a biographical novel, meaning that while it’s based on true events, it’s a fictional account of how things may have gone. Kaskel used newspaper clippings, court transcripts, and biographies as resources.

I found it an interesting read. I enjoyed the account of how Bergh founded the ASPCA, and how the organization was instrumental in changing public perceptions about animals. Bergh was seen painted somewhat glowingly, but it was easy to see that he was a man who was somewhat maniacal in his pursuit of his goals. Good. I’m far from perfect too, so it’s nice to be reminded that ordinary people can do great things.

I was also reminded that in many ways, such as regarding animals used for food, our public perceptions haven’t changed very much. I also saw the same tactics used to try to shut us up today were used back then. Some things never change, do they? 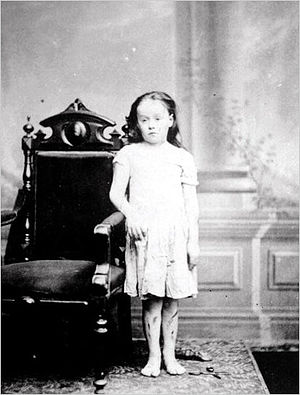 Mary Ellen Wilson, the first child removed from a home because of abuse.

One fascinating thing you may not know is that animal welfare legislation was enacted before child welfare legislation. Parents were able to “discipline” their children as they saw fit, no matter how cruel. It wasn’t until a missionary, after exhausting other avenues, approached the ASPCA asking them to intervene on behalf of a child, and Bergh agreeing to do so, that anyone ever successfully prosecuted a parent for abusing a child. From that experience, the child welfare movement began. Kaskel’s account of Mary Ellen Wilson’s story is gripping, and the facts in the novel are true to the case.

Now let me say there are a few things about the novel I don’t care for, including:

This is not exactly a well-written novel. The author jumps back and forth without warning, and it’s rather annoying. But the story itself will trump that detail.

The author’s writing about Bergh’s sex life seemed irrelevant to the story, and turned me off.

I don’t personally care for fictionalized accounts of history, because it’s too easy to assume fiction is fact. However, since reading this novel, I have been motivated to learn more about Henry Bergh, and I believe that’s the author’s intent.

That having been said, I still see great value in reading this book, especially for those of you who want to know where our movement began. Indeed, Bergh is the most famous man you’ve never heard of.

Hello and welcome. I’m a 50 something woman who’s probably awake when she should be sleeping. Oh, and there are animals, because who doesn’t have pets?
View all posts by Jen and the Furries »
« We’re Having Problems with Bubba Cat
Bubba’s Vet Visit »