Animal Cruelty Near My Own Hometown…..

Moulton is a small town of 3,000 people located in northern Alabama. It’s less than an hour from the town where I grew up. The people are friendly, church-going conservatives.

And it’s the home to horrific animal cruelty.

Meet Carolyn Atchison. For a decade, she contracted with Lawrence County, Alabama, to operate the holding facility for the county’s animal control services. In return she received $70,000 a year, use of and gasoline for a county truck, and a cell phone. She lost her contract in 2013.

She’s also the owner of Animal House Zoo, a backyard zoo housing all sorts of exotic animals. She used to have a USDA license to own exotic animals, and in 2004 owned 29 tigers. Her license wasn’t renewed in 2006 because of violations of the Animal Welfare Act.

What do these two things have in common? Simply put, she used to feed the dogs and cats from the shelter holding facility to the big cats she kept in the zoo.

When rescue groups went to Atchison’s property to remove the county’s remaining shelter dogs and cats, they saw evidence of the horrific treatment of the animals. A leopard had a huge gash on him, and the rescuers were told it was caused by a doberman placed in the cage for the leopard to eat, but the dog first put up a fight. 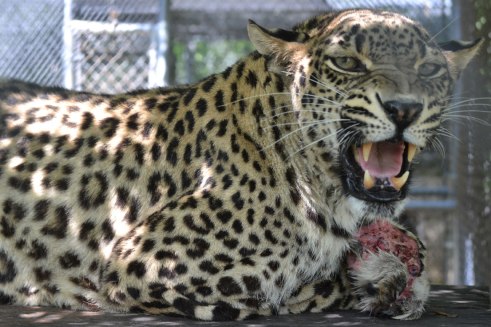 As awful as this photo is, there are other photos that show how horrible the gash truly is, but I didn’t want to gross you all out. (PHOTO: 911animalabuse.com)

This leopard died, but not before languishing for almost a year. He received no vet care. And no government agency intervened, though the USDA, US Fish and Wildlife Service, and the local sheriff were informed of what was going on there.

Big Cat Rescue tried to get Atchison to surrender the leopard to them so they could provide care, but she refused. Since the leopard’s death, she has surrendered Mickey, a lame cougar. Vets with BCR have determined Mickey has been lame for over a year because both knees have torn ACLs so that they buckle when he tried to walk. Mickey also had rotted teeth and infected gums. They aren’t sure yet if they can treat Mickey’s knees; they’re awaiting further test results. 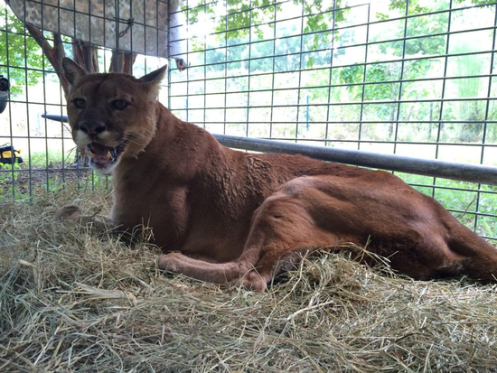 This is Mickey. His knee ligaments are torn, and, as a result, he’s been lame for approximately a year. (PHOTO used with permission from bigcatrescue.org)

Carolyn Atchison still has two tigers, two bears, wolves and lemurs in her care, though she is said to be suffering from dementia.

There is no government agency that will step in to help these animals, and rescuers can only take the animals if Atchison surrenders them. Atchison has agreed to surrender the wolves and one of bears, but, as of yet, there’s no rescue found that can take them.

Dear readers, THIS is why we need federal legislation to regulate the ownership of exotic animals. This woman’s horrific treatment of animals has gone on for years, and it was bankrolled by local tax dollars, entrance fees, and tax-deductible donations. Now the community that made this tragedy possible has turned a blind eye to the few remaining animals left behind.

What can you do to help these poor creatures? Truth be told, there’s not much that can be done. Unless and until Atchison is deemed incompetent, she alone is allowed to make decisions about their well-being- or lack thereof.

However, there ARE things you can to do stop others from creating these ridiculous backyard zoos:

Most importantly, don’t assume this is an isolated case. With more tigers held in captivity than living in the wild, stories such as this one are all too common.

125 thoughts on “Animal Cruelty Near My Own Hometown…..”