He did it again this morning.

Buggie resting by my laptop after his morning foray.

I confess that I haven’t been as diligent lately as perhaps I should. But this is the first time he’s tried to run outside in over a year. I’d dare to hope he was finally too old for his little escape attempt routine.

But no, this morning at 5:30 AM, while it was still dark, Rumpy and I headed out, and June Buggie ran out with us.

It’s always a frightening experience. Junior is hell-bent on getting outside, but once he’s out, he’s frightened and confused. What makes matters worse is that I am too. So of course I chase him. Yes, rationally I know better. But when my heart’s in my throat, I’m not rational. Who would believe that a woman who does what I do for a living could be overwhelmed by a little, ornery, 17-year-old cat running outside?

At this point, perhaps you’re asking me why I don’t just let the cats go outside. I have a laundry list of reasons, including:

But, most importantly, because when indoor cats find themselves outdoors, they are fearful. That’s why you should NEVER dump an indoor-only cat outside on his or her own. 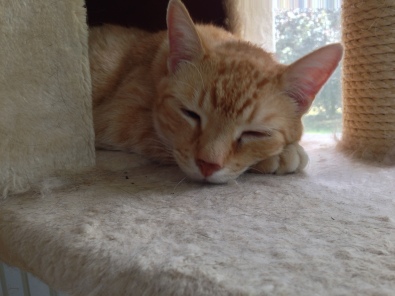 The elder June Buggie has been content to remain inside… until today.

Fortunately, Rumpy and I were able to herd June Buggie inside, and once there he was back to his cool, calm, and collected self. He fussed at me to hurry up and feed him. Instead, I picked him up and gave him a big hug, which he hated.

And then silently I prayed he never does that again.

Hello and welcome. I’m a 50 something woman who’s probably awake when she should be sleeping. Oh, and there are animals, because who doesn’t have pets?
View all posts by Jen and the Furries »
« A New Partner in the Humane Animal Practices Movement
Adventures in Dog Exploitation- First World Edition »