June Buggie ran away from home. 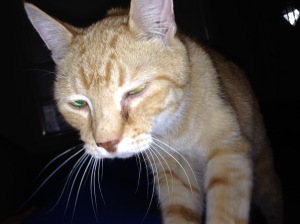 MEOW! I found someone new, and she’s better than you!

I found the note this morning. It took me awhile to decipher, because his penmanship sucks, but was eventually able to make out that after 17 years of putting up with my crap, he was over it and ready to move on. He tied a couple of cans of Fancy Feast inside of a kitchen towel, along with a catnip mouse, broke out a window on the front porch by knocking over my weed eater, then hit the road.

Rumpy is incredibly sad, but relieved that no longer will he be subjected to random smacks to the nose for no other reason than June Buggie KNEW he could get away with it. 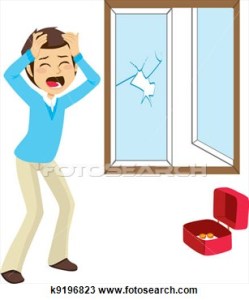 A clip art representation of how I felt this morning when I realized I’d have to pay to get the window fixed (clip art from pixgood.com).

As for me, I’m feeling guilty, but I am also extremely angry. I put up with that cat clawing up my arms, jumping on me in strategically sensitive areas while I slept, and meowing in my face whenever he wanted something for 17 years, and THIS is the thanks I get? Does he not CARE how much money I’ve spent on vet bills, cat food, kitty litter? How I’ve scooped litter boxes every day so he would have a clean place to poop? How I had to watch the door every time Rumpy and I went out because June Buggie was going to try to run out with us? How I chased him whenever he DID get out, because once he was out there, he was scared to death? How I’ve met his insatiable desire for cream by giving him a little every morning, even though I know it really isn’t good for him to ingest that stuff?

So if the little ingrate wants to try to find some greener grass somewhere else, let him have at it. At least Rumpy still loves me.

The last thing June Buggie wrote is that he’s met someone new on Facebook and he’ll be moving in with her. Her name is Lirpa Loof.

Hello and welcome. I’m a 50 something woman who’s probably awake when she should be sleeping. Oh, and there are animals, because who doesn’t have pets?
View all posts by Jen and the Furries »
« Sign! Sign! Everywhere a Sign!
What Happens When You’re Bitten by a Dog »