What We Call Family?

Last Tuesday I wrote about why I consider my pets as members of my family. 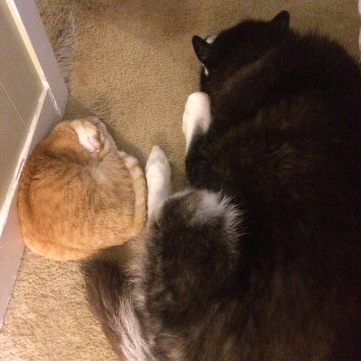 The BFFs at rest.

The next day I received my weekly email from Faunalytics (formerly Humane Research Council) where they spotlight a variety of papers and studies relating to animals and animal welfare. By the way, anyone can sign up for access to Faunalytics and gain access to a clearinghouse of research, some studies include only the abstract but others give full access to their research papers.

Anyway, one of the papers Faunalytics highlighted this week is entitled “Barking Up the Wrong Tree: Companion Animals, Emotional Damages and the Judiciary’s Failure to Keep Pace“ by Sabrina DeFabritiis, Associate Professor of Legal Writing at Suffolk University Law School.

In this paper Ms. DeFabritiis discusses how companion animals went from workers to family members that many consider their children. But the courts haven’t moved along with us.

What does Ms. DeFabritiis mean by that? Say you came down here to Florida with your 5-year-old human child and a drunk driver ran up on the sidewalk and hit and killed your child. In addition to criminal charges, you would most likely sue the drunk for emotional pain over having watched your child die. The suit could potentially ask for millions of dollars in damages. It won’t bring your child back, but it gives you some way to show that drunk that the life he or she took mattered.

On the other hand, if you came to Florida with your five-year-old Irish Setter, whom you also consider a child, and a drunk driver hit and killed your dog, the courts would look upon that incident far differently. Why? Because in the state of Florida, and indeed in most states in the country, dogs are considered property and you are limited by law to the economic value of the loss. In other words, you could sue for what you could have sold the dog for on the day he or she died.

If, while out for a walk, someone caused deliberate injury or death to Rumpy, I could sue for up to $1000, because Rumpy is no different in the eyes of the law than a chair.

Why is that? According to Ms. DeFabritiis, courts have held that while humans have emotional bonds to animals comparable to those of other family members, there is no law that allows for them to act in any other way.

Three states (Tennessee, Illinois, and Connecticut) have enacted laws that give courts more leeway, but the laws are very restrictive. In Tennessee, for example, the law only covers dogs and cats and is limited to injury to the animal either on the owner’s property or while the animal is under the control of the owner.

Though other states have tried to pass laws, there has been huge push-back from the animal agriculture and veterinary industries who are afraid they’ll have to meet the increased standards too.

So what’s the solution? Ms. DaFabritiis offers that proposed legislation should cover these four areas:  (1) the definition of a “companion animal” or “pet”; (2) a description of the actionable tortious conduct; (3) the recoverable damages; and (4) parties exempt from liability or subject to limited liability. She states that Animal Legal Defense Fund is developing proposals of legislation for states to consider.

So what can you do? I think it’s important for each of us to write our state elected officials and let them know what our companion animals mean to us, and then ask them to introduce legislation that allows owners to sue for non-economic damages when our animal companions are injured due to negligence or maliciousness.

What about you? How do you see your companion animals? Do you feel you should be able to recover more then just the sale price for your beloved companion?

Hello and welcome. I’m a 50 something woman who’s probably awake when she should be sleeping. Oh, and there are animals, because who doesn’t have pets?
View all posts by Jen and the Furries »
« How NOT to Sell a Car to a Woman
A Monday Limerick- Because Monday Sucks »

29 thoughts on “What We Call Family?”