Last night at 12:30 am, some idiot set off powerful fireworks here in the neighborhood. Approximately 5 minutes later they set off a second time. I know what time it was because the explosion woke me from a sound sleep.

It also startled the neighbor’s dog who lives his life at the end of a chain. The poor creature barked for over an hour.

This morning I was out with Rumpy at 6am; we heard someone setting off fireworks at that time of day.

I was out watering the flowers when a neighbor walked by. I said hello and mentioned the fireworks last night. She said that earlier in the week neighborhood kids were lighting fireworks and throwing them at a dog chained up in his yard.

There are idiots who set off fireworks, and there are cruel bastards that do so. I had heard the firecrackers being set off but had no idea they were being thrown at a dog. I never heard a dog bark. But rest assured if I hear them again I will go investigate.

The neighbor who mentioned the kids throwing fireworks described them as foolish. I see them as cruel, especially since they did so repeatedly.

If you see signs of cruelty, don’t pass that behavior off as youthful indiscretion. Report it to your local law enforcement agency. They may not do anything with the kids but they WILL have to file a report. Then when they are called out again for other cruel behavior by those kids, there will already be a paper trail showing a pattern of behavior. 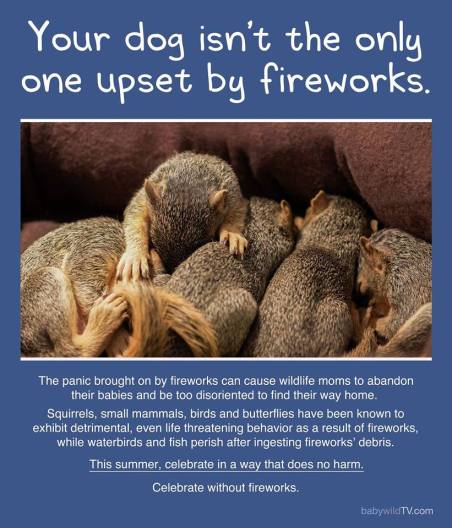 26 thoughts on “Fireworks, Idiots and Sociopaths”