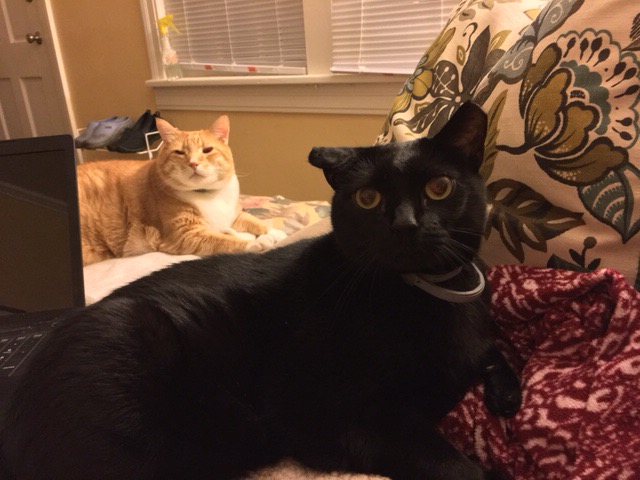 So I checked my account and saw that today marks 6 years since I published my first blog post at Rumpydog. Yay me!

Back then there were three dogs and 6 cats sharing blogging credits with me. Today there are 5 cats blogging. No dogs are still here.

Recently Helen at Hell on Wheels/ Life One Handed asked me to introduce the family in a blog post. So to update Helen, and the rest of you, on who’s presently blogging in this family, I present a post of Who’s Who. 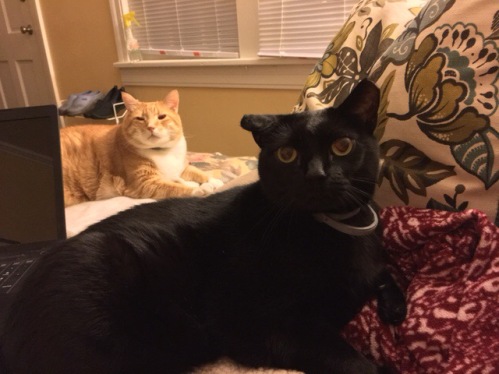 This is Little Girl (with Yella in the background). Little Girl is 8 years old. She was born to a feral mom and has lived with me since she was about 6 months old. As the only female feline of the bunch, she often finds herself having to put these fellas in their place. Little Girl is a lap cat and likes to cuddle close to me at night.

The other house panther is Graybow, who goes by Graybie Baby. Graybie was born to a feral mama in my back yard and Sage (the Weimaraner who died soon after this blog’s inception) found the mama and newborn babies. Mama abandoned the kittens, which I found a day later cold and crying. I bottle-fed them and two of the four lived. Graybie’s name came from the fact he was gray as a little kitty. Only after he was named did his fur change color. Typical. Graybie is also 8 years old. He is a bit of a bully and has decided he rules the roost.

Yella Fella is Graybie’s litter mate and was the other surviving bottle-fed kitty. Like Graybie, he was named before his color came in good, as he is really more red than yellow. Yella is on a diet because his vet said he really needed to lose some weight. He’s not happy about it, but I remind him it’s for the best.

Bubba, on the other hand, needs to eat as much as possible. At 17, he’s the elder gentleman of the household. Bubba has arthritis, hyperthyroidism, and kidney issues. I’ve been told he’s near the end for the past 4 years, and yet, here he is. Bubba is doing better in the eating department, but I’d be happy if he’d eat just a little bit more. He’s lived with me since approximately 10 weeks old, when a co-worker captured him and June Buggie on the campus of the training academy where I worked. He was best friends with Lucky Dog. When he died, Bubba took up with DeDe Dog, and when she died, he teamed up with Rumpy. Now he only has me, and he’s not exactly happy about it. 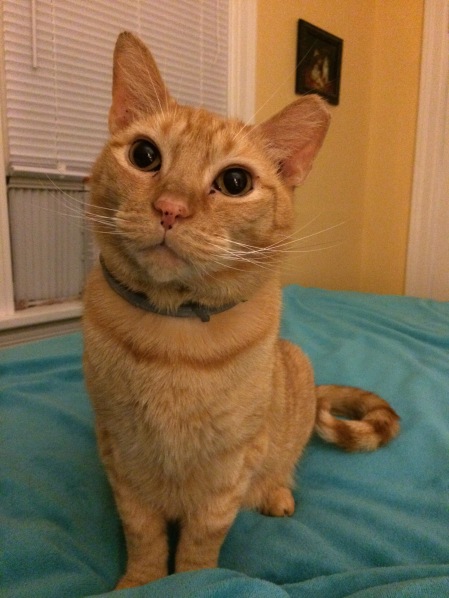 And last, but by no means least, is Hissy Fit Jones. Hissy was also born to a feral mama who brought him up to my house as a kitten because he was very sick. I doctored him up as best I could and made sure he ate regular, and eventually brought him in. Hissy has remained true to his feral roots, but he does enjoy snuggling with me when I am sitting on the couch or lying in bed, and he is never too far away when I’m eating.

The gang wants to thank you for sharing with us our blogaversary, and they assure you they will continue to spur me to blog for many years to come.

43 thoughts on “Happy Blogaversary to Me!”

Five feral kittens post-surgery. Turns out one of the females was in heat, so we got these kids neutered in the nick of time. Now for some rest and recovery, then they can be safely released. #cats #tnr #catstagram #feralkitten #communitycatsneedlovetoo