I Wonder What They Think About Me…

Today I am a famous blogger, but it wasn’t always that way.

This week the human leader of the United States called certain countries “shitholes.” When the world called him a racist, the president and his supporters claimed he was just saying what other humans think and say out loud in bars. When that didn’t work, he had his minions claim he never said it at all.

What does this have to do with me?

Just as humans rank the value of humans by how many green papers they have and what color they are, they also rank us cats by our value to them.

With cats, humans most value the ones they pay lots for. Those are the cats that are not normal, but are bred to be cute to hook humans into buying them. They’re bred with exotic cats. Bred to have flat faces, long furs or funny ears. Kinda like genetic engineering.

There are kittens and cats that are rescued and adopted.  Humans now think it’s cool to adopt us, and that’s helped save a lot of our fellow Kitizens’ lives. Euthanization rates continue to decline annually as more of us are adopted.

But there are an estimated 30-40 million homeless cats in the US, and some humans think of us as nuisance cats, or the “shitholes” of the cat world. Some of us are strays that may have lost our way or were left behind. Others of us are feral.

We are vilified for spraying their stuff, pooping in their yards, leaving our footprints on their cars, and making loud noises late at night.

We are blamed for the decline in the numbers of birds around the world. We are accused of spreading diseases or causing injury to owned pets.

Humans say bad things about us, like homeless cats should be murdered because we do more harm than good. When other humans are outraged at their comments, those humans just say they’re speaking out loud what many others think but are afraid to say.

I was born to a feral mother and when old enough was TNR’d. I initially came inside because I was very sick, and have lived inside since. I never have become a lap cat and had I not become ill  would have spent my life outdoors.  There I would have braved the elements and faced such dangers as leg traps, poison, starvation, and serious illness. My life expectancy would have been around 2 years, maybe a little longer if I remained in a cared-for colony. 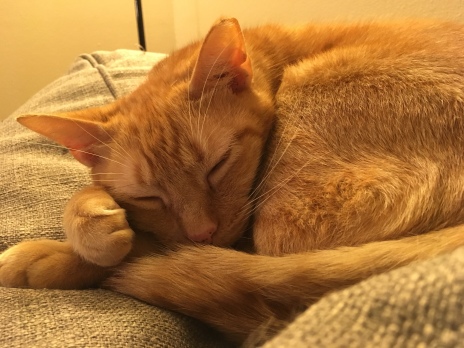 The worst thing I have to worry about today is a late dinner service.

Being a famous blogger, it’s easy to forget my humble beginnings. This week I’m reminded that I’m one of the lucky ones. Tonight there will be millions of cats hoping for a space that is safe and warm with access to water and food. Those cats know that while some kind souls are concerned for their well-being, others would just as soon see them dead.

I wonder if the people that sit in bars and call African countries shitholes are the same ones that say that about us?

Hello and welcome. I’m a 50 something woman who’s probably awake when she should be sleeping. Oh, and there are animals, because who doesn’t have pets?
View all posts by Jen and the Furries »
« Dear Kitizens, The Time Has Come…
Welcome to Hell »

25 thoughts on “I Wonder What They Think About Me…”