It’s Valentines Day- a day set aside for love.

And we’re showing our love for God and country by hating each other’s guts. 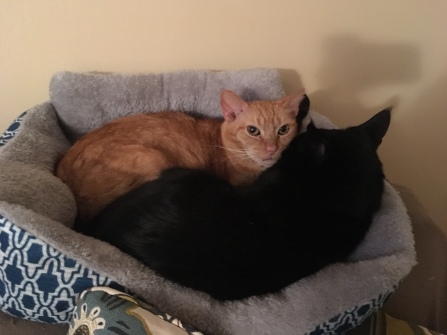 We could learn a lot from cats

African-Americans are hated because they aren’t patriotic.

Women are hated because they all lie about sexual assault which ruins the lives of innocent men.

And now poor people join the list because they depend on government resources for access to health insurance, affordable housing… and food.

Meanwhile those that loathe our president and all he stands for hate him, his political party, and those who support him. 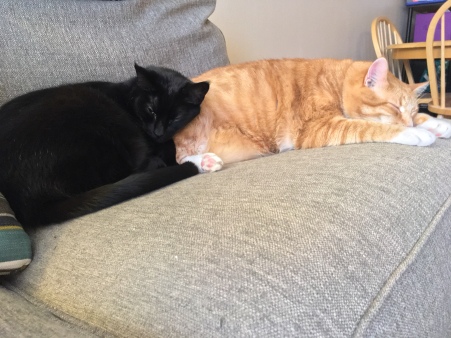 This morning’s news included stories of white supremacy propaganda being posted on college campuses in Tennessee and across the country. People are sharing fake news written by Russian propagandists that is designed to create turmoil in the nation, and indications are it will only worsen as we approach the fall elections because Russia sees their trolls and bots as a cheap and effective way to tear our country apart.

Despite all that, this morning I woke up with cats in my bed nuzzling my head, licking my hand, and now are snoozing nearby as I sit on the couch writing this post. I’ve finally found a part-time job that appeals to me providing direct support to persons with developmental disabilities living in community group homes. I gifted myself with an American Sign Language class, a language I’ve always wanted to learn, and I’ll practice my new skill this evening.

You can wish things in our world today were different, but it is what it is. So put the insanity on hold and embrace those you love, and include yourself in that.

Don’t worry: the hatred that is our world today will be waiting for you tomorrow.

Hello and welcome. I’m a 50 something woman who’s probably awake when she should be sleeping. Oh, and there are animals, because who doesn’t have pets?
View all posts by Jen and the Furries »
« Euthanasia Drug in Pet Food?
ENOUGH! »

This is the famous Lucille Sanzibar Oppenheimer, jet-setting cat extraordinaire. Today she’s enjoying the comforts of a little hideaway she calls Sofay, but we call the sofa. #catsofinstagram #catstagram #cats #cute #jetsetter #trendsetter