In addition to the endless parade of “thoughts and prayers,” here’s what some folks are saying on social media after the Parkland school shooting: 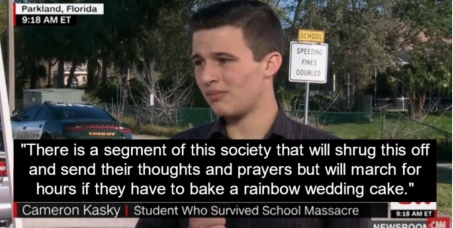 “Dear God, why do you allow so much violence in schools? I’m not allowed in schools. – God”   I told a poster’s ass off for being incredibly cruel and stupid, and she responded that if I didn’t like it, don’t read it.  I unfriended her. Since then I’ve seen several others post it. Of course they post a lot of stupid shit (like one who posted a photo of Robert E. Lee this week. I asked why she posts photos of traitors to her country.)

A video clip of Spokane County Sheriff Ozzie Knezovich from September of last year popped up. In the video he blamed society, gang culture, video games, the media, and elected officials. He also defended guns. I wasn’t very nice in response to that one either. I said that maybe I can’t change your mind about guns, but please quit justifying the murder of our children.

A relative posted, “Place three armed veterans in every school.” Right, because what we need is armed vets with untreated PTSD around a bunch of smartass teenagers.

Other things being said about the shooting include:

–God allowed this to happen because America legalized abortion. Can we finally admit that some of these anti-abortion activists are nuts?

–“No, the #schoolshooting suspect was not a white supremacist, Trump supporter, or even a Republican… He admired communism and voted for the Democratic Party.” This one doesn’t make sense. The admitted murderer is 18 or 19, so he probably hasn’t voted for anybody yet.

–the school shooting happened because some bad revelation about Obama was supposed to hit the news. Because no matter what it is, it’s always the black man’s fault.

–it didn’t happen (#fakeshooting) Yeah, this group of folks is nuts too. Does it not scare you how many people in this country believe stupid shit? It does me.

Meanwhile people are gathering in protest. Two teachers crashed a GOP fundraiser Friday night in the Keys and confronted Paul Ryan. People protested Saturday at the Broward County, FL federal courthouse.  Kids are planning nationwide school walkouts to demand common sense gun regulation. These kids give me hope that maybe one day we can stop the madness.

On a separate but related note, Robert Mueller’s team on Friday announced indictments against 13 Russians for meddling in the US election. In those indictments we learned that a Russian troll factory called the Internet Research Agency led discussions on social media sites, posted memes that were shared thousands of times, and even organized and paid for people to attend events. The troll farm supported both Trump and Sanders (I knew it!) and worked to divide Americans on a variety of issues.

And they’re still at it! Facebook and Twitter have done very little to curb the practice, and the Russian trolls are fanning the flames after the Parkland school shooting. A lot of this crap you’re seeing people share was probably started by Russian trolls.

When Internet Research Agency financial backer Yevgeniy Viktorovich Prigozhin was asked about the indictments, he responded,  “The Americans are very impressionable people, and they see what they want to see.”

I agree, Mr. Prigozhin. We see every cause in the world for a mass-shooting except the obvious one. I guess we’re “impressionable” like that.

Hello and welcome. I’m a 50 something woman who’s probably awake when she should be sleeping. Oh, and there are animals, because who doesn’t have pets?
View all posts by Jen and the Furries »
« ENOUGH!
We Hear About Those that Died. What About Those That Lived? »